This U.S. Vice President John Adams History Mug is one of a complete collection of U.S. Presidential biographical mugs. An image of John Adams and a short biography are features of this history mug.

John Adams played a lead role in declaring American independence.  He helped Jefferson draft the Declaration of Independence.  At the close of the war, as a diplomat, he helped negotiate the peace treaty with Britain.  Adams served two terms as vice president to George Washington.  After his first term as president, Adams lost his run for reelection to Thomas Jefferson.  He signed the Alien and Sedition Acts and increased the size of the Army and Navy.  John Adams was the father of the sixth president, John Quincy Adams, and the first president to reside in the executive mansion, now known as the White House.

The biographical History Mugs were created to teach and inspire individuals to learn about our diverse and interesting history.  The biographies were researched and written by history enthusiast, Robert Compton.  He colorized most of the historic photos and images used on the mugs, which were originally black and white or sepia-tone.  The images and biographies are imprinted on mugs at his studio in rural Vermont. 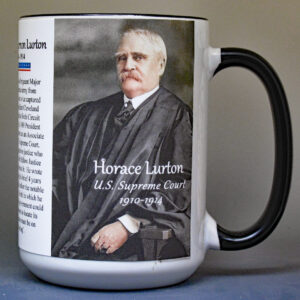 The Royall Tyler mug is part of a biographical series profiling unique individuals who shaped the history of Vermont.  An image of Royall Tyler and a short biography are features of this history mug.

This U.S. Vice President Hannibal Hamlin History Mug is one of a complete collection of U.S. Presidential biographical mugs. An image of Hannibal Hamlin and a short biography are features of this history mug.