Joseph Biden was a career politician who served as a senator from Delaware and vice president under Barack Obama, before his election as president in 2020.   Biden experienced great personal tragedy when, in 1972, his wife and daughter were killed in an auto accident and again when his son Beau died of cancer in 2015.  He was a centrist Democrat and had a good rapport with Congress.  Joe Biden chose Kamala Harris as his vice president, making her the first woman, and the first woman of color, to hold that office.  Biden was elected with the theme of bringing a divided country together, combating the Coronavirus pandemic, and improving relations with America’s historic allies.  Reversing the pattern of isolationism he inherited from the previous administration.

The Joseph Biden biographical history mug is part of our Presidential series.  The biographical History Mugs were created to teach and inspire individuals to learn about our diverse and interesting history.  The biographies were researched and written by history enthusiast, Robert Compton.  He colorized most of the historic photos and images used on the mugs, which were originally black and white or sepia-tone.  The images and biographies are imprinted on mugs at his studio in rural Vermont.

This U.S. President John Tyler History Mug is one of a complete collection of U.S. Presidential biographical mugs.  An image of John Tyler and a short biography are features of this history mug. 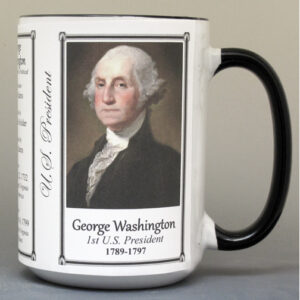