Robert Todd Lincoln attended Harvard University in 1864, but left, over the objections of his mother, in order to join the Union Army.  Commissioned an assistant adjutant he served as part of Grant’s immediate staff.  He turned down an invitation to attend the play at Ford’s theater on the night his father was killed, sighting fatigue after coming home from the battlefront.  After his father’s death, Robert moved with his mother and brother Tad to Chicago.  He finished his law studies and was admitted to the bar in 1867.  In 1868 he married Mary Eunice Harlan, they had three children.  Robert Todd Lincoln served as Secretary of War and Ambassador to the United Kingdom. He was a dedicated amateur astronomer and constructed an observatory at Hildene.

This Robert Todd Lincoln mug is part of our US Civil War series profiling participants in the War Between the States.  Thousands of Confederate and Union soldiers fought in battles such as Bull Run, Antietam, Fredericksburg, Chancellorsville, Gettysburg, Vicksburg, Chattanooga, Cold Harbor and Petersburg.  We honor their sacrifices by telling their stories. 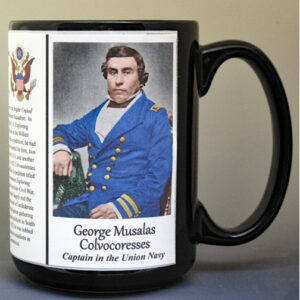