Designer of the US Treasury Seal, Francis Hopkinson

Francis Hopkinson was a representative from New Jersey to the Second Continental Congress and signatory of the Declaration of Independence.  He was also an author, a composer of many of songs and a lawyer.  He was the designer of the flag of the United States, the Naval Flag of the United States and the Board of Admiralty seal.  Francis Hopkinson designed the first treasury seal and was part of the committee that designed the Great Seal of the United States.  The Great Seal is used to authenticate documents issued by the federal government.  It was first used publicly in 1782, and since 1935, both sides of the Great Seal appear on the One Dollar Bill.

This Francis Hopkinson History Mug is part of our U.S. Treasury series which includes the many of unique individuals who served as U.S. Secretary of the Treasury, as well as, Hopkinson who designed the U.S. Treasury Seal.

The Treasury Secretary is one member of the president’s Cabinet of advisors.  The United States Cabinet was first established by President George Washington.  He created four positions for senior specialists to provide him with a source of critical guidance and intelligence, in the form of Attorney General, Secretary of the Treasury, Secretary of State and Secretary of War.  Current presidential cabinets are made up of sixteen officers.  Cabinet members are chosen by the president and confirmed by the U.S. Senate.

The Thomas Custer mug is part of a biographical series profiling unique individuals and includes an image of Thomas Custer and a short biography. 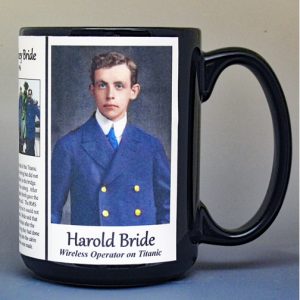 The Harold Bride mug is part of a biographical series profiling unique individuals and includes an image of Harold Bride and a short biography.