U.S. President William Henry Harrison was a military officer, politician, and the first president to die in office.  At 68 years old, he was the oldest president to take office until Ronald Reagan.  Before his election, he served as the first governor of the Indiana Territory and was later elected as a United States representative and senator from Ohio.  In 1811, he gained fame for leading Army forces against Native Americans at the Battle of Tippecanoe, which earned him the nickname “Old Tippecanoe.”  William Henry Harrison was a general in the War of 1812.  After losing a bid for the presidency in 1836, he ran again and won in 1840.  A month after taking office, he died after contracting pneumonia.

The William Henry Harrison biographical history mug is part of our Presidential series.  The biographical History Mugs were created to teach and inspire individuals to learn about our diverse and interesting history.  The biographies were researched and written by history enthusiast, Robert Compton.  He colorized most of the historic photos and images used on the mugs, which were originally black and white or sepia tone.  The images and biographies are imprinted on mugs at his studio in rural Vermont. 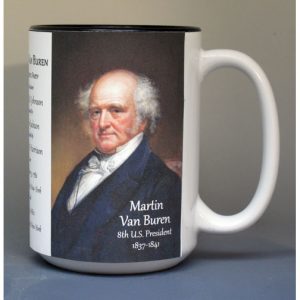