This Joseph Compton mug is part of our collection of Civil War biographical mugs.  An image of Joseph Compton and a short biography are features of this history mug.

Joseph Compton was a brass finisher in a shipyard before the Civil War.  In 1861, he enlisted in the 72nd Pa. Infantry Regiment and fought at Fair Oaks and Antietam.  In 1862 he was wounded in the arm at Fredericksburg and discharged in March 1863. In September Joseph enlisted in the 34th N.J. Infantry Regiment and rose to the rank of Second Lieutenant.   On April 30, 1866, in Camden, Alabama, he mustered out of the 34th regiment.  Several months later his wife Adlethea hired a lawyer to determine why he never returned to his family.  Joseph had four children, George (1855), Gilbert (1858), Anna (1861), and William (1864).

This Joseph Compton mug is part of our Civil War Series profiling participants in the War Between the States.  Thousands of Confederate and Union soldiers fought in battles such as Bull Run, Antietam, Fredericksburg, Chancellorsville, Gettysburg, Vicksburg, Chattanooga, Cold Harbor and Petersburg.  We honor their sacrifices by telling their stories. 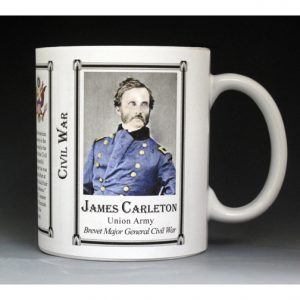