The Jacob Parrott mug is part of a biographical series profiling unique individuals and includes an image of Jacob Parrott and a short biography.

Jacob Parrott joined the US Army in 1861, as a private in Company K, of the 33rd Ohio Infantry.  In 1862, he volunteered to take part in a raid, led by James Andrews, a civilian spy, to capture a train named “The General” located in Big Shanty, GA.  After hijacking the train, they tore up the rails, switches, and cut telegraph lines before they were caught.  Jacob Parrott was severely beaten over 100 times before he was returned to the Union in a prisoner exchange.  He was awarded the “first” Medal of Honor by Edwin Stanton on March 25, 1863, and became a first lieutenant in 1864.

Jacob W. Parrott received the “first” Medal of Honor for his bravery in The Great Locomotive Chase aka Andrew’s Raid on April 12, 1892.  The raid went nearly 200 miles into enemy territory and captured a railroad train in an attempt to destroy the bridges and tracks between Chattanooga and Atlanta.

The Medal of Honor is the highest and most prestigious personal military decoration.  The medal is normally awarded by the President of the United States in the name of the U.S. Congress.  It was first introduced in 1862. There have been 3500 medals awarded, with  40% of that number during the American Civil War.

This Jacob Parrott History Mug is part of the Medal of Honor series. 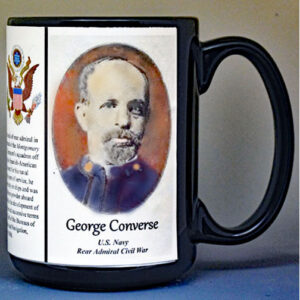