Sally Louisa Tompkins opened the Robertson Hospital in Richmond shortly after the First Battle of Manassas.  The hospital had the highest number of men who recovered from their wounds and returned to service, of 1334 wounded men treated there only 73 died. Jefferson Davis required all military hospitals be managed by military personnel.  Sally was the first woman commissioned in the Confederate Army.  She accepted the appointment as captain but refused payment for her service.  She was remembered as the “Angel of the Confederacy.”

This Sally Louisa Tompkins mug is part of our Civil War Series profiling participants in the War Between the States.  Thousands of Confederate and Union soldiers fought in battles such as Bull Run, Antietam, Fredericksburg, Chancellorsville, Gettysburg, Vicksburg, Chattanooga, Cold Harbor and Petersburg.  We honor their sacrifices by telling their stories. 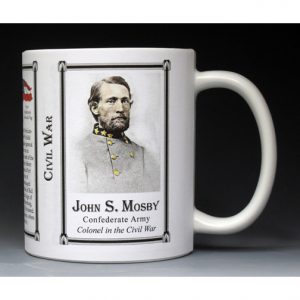