This Richard Ewell mug is part of our collection of Civil War biographical mugs.  An image of Richard Ewell and a short biography are features of this history mug.

Richard Ewell lost his right leg in 1862 and returned to service in 1863 taking command of the 2nd Corps after the death of Stonewall Jackson.  At Gettysburg, Ewell drove the Union troops out of town and onto Cemetery Hill.  Lee gave him discretionary orders to take the hill if practicable.  Ewell felt his men needed rest and chose not to attack, and Major Early concurred, thus leaving the Union with the high ground at the end of the first day’s battle.  This incident gave the Union time to reinforce the ridge holding the high ground throughout the next two days of battle.

This Richard Ewell mug is part of our Civil War series profiling participants in the War Between the States.  Thousands of Confederate and Union soldiers fought in battles such as Bull Run, Antietam, Fredericksburg, Chancellorsville, Gettysburg, Vicksburg, Chattanooga, Cold Harbor and Petersburg.  We honor their sacrifices by telling their stories. 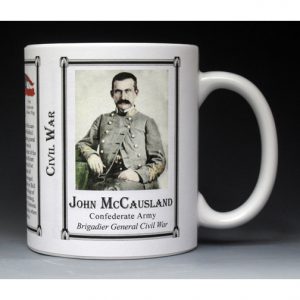